Thanks to a number of important contracts, Nidec ASI is growing and expanding its activities. Giovanni Barra, CEO of the multinational, points out that ‘our financial year runs from March to April of the following year, so we just ended 2015 with a 100% growth in inbound orders in the last a portfolio increase of 200%, and a tripling of EBIT since 2013.

In 2016 we expect to reach almost $400 million in sales, with an organic growth of 29% over the previous year.”
Global competitiveness and a strong development plan are the key elements of the continuous growth strategy established by CEO Barra. Nidec ASI, which offers customised solutions for a wide range of industrial applications worldwide, has made three moves of global significance in recent months. In May, the company was selected by the Russian oil giant, Transneft, for an order worth 125 million euros, to supply 250 electric motors for the modernisation of the existing installations of the pumping system of one of the world’s longest pipelines (approximately 80,000 km).

This project comes after another order in February 2015 for 70 mega motors and mega inverters for the 4,000-km ESPO pipeline (Eastern Siberia Pacific Ocean), connecting Russia to the Asian nations of China, Japan and South Korea. In addition, just before last Christmas, Nidec ASI won the contract for the supply of multiple systems of energy storage for the German utility company, STEAG. With a capacity of 90 MW, it is currently the largest energy storage system of its kind.

These three major projects have, in just a year, swept Nidec ASI into a leading position in the energy sector. Under the control of the Japanese company Nidec, listed on the Tokyo Stock Exchange, the company operates with full strategic and operational autonomy, benefiting from the investment in growth made available by the Japanese group. 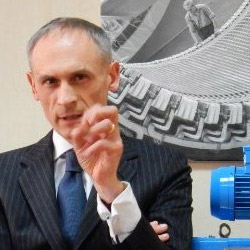